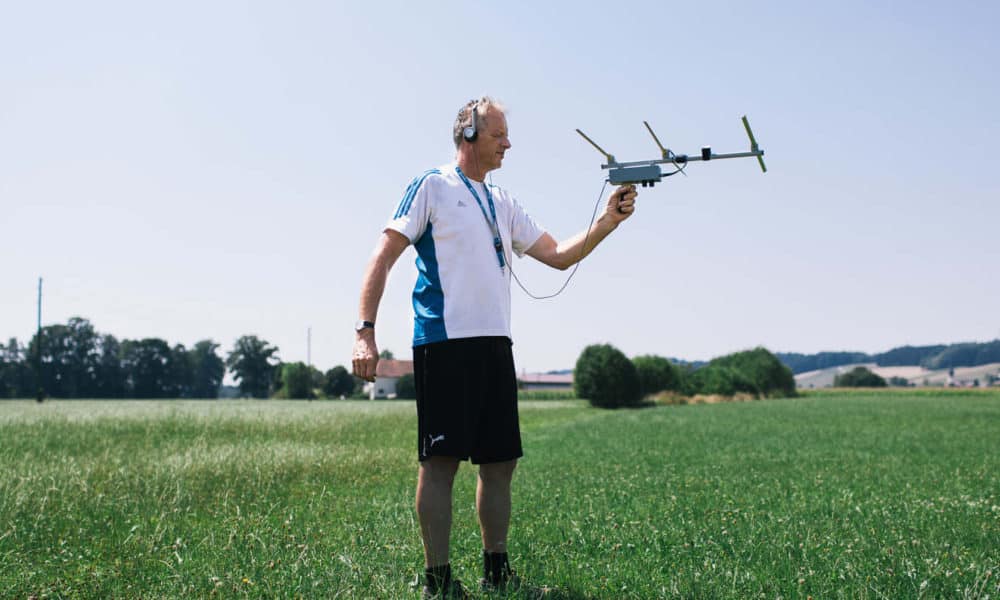 The rules of the sport and international competitions are organized by the International Amateur Radio Union. The sport has been most popular in Eastern Europe, Russia, and China, where it was often used in the physical education programs in schools.

NOTE: The content of this page have been copied from Wikipedia, and modified for use on this wiki

ARDF events use radio frequencies on either the two-meter or eighty-meter amateur radio bands. These two bands were chosen because of their universal availability to amateur radio licensees in all countries. In the UK events are also run on 160 meters.

The radio equipment carried by competitors on a course must be capable of receiving the signal being transmitted by five transmitters and useful for radio direction finding, including a radio receiver, attenuator, and directional antenna. Most equipment designs integrate all three components into one handheld device.

Where are competitions run?

An ARDF competition takes place in diverse wooded terrains, such as in a public park or natural area. Each competitor receives a detailed topographic map of the competition area. The map will indicate the location of the start with a triangle and the location of the finish with two concentric circles. Somewhere within the competition area designated on the map, the meet organizer will have placed five low-power radio transmitters.

Competitors start at staggered intervals, are individually timed, and are expected to perform all radio direction finding and navigation skills on their own. Standings are determined first by the number of transmitters found, then by the shortest time on course. Competitors who take longer than the specified time limit to finish may be disqualified.

ARDF events use radio frequencies on either the two-meter or eighty-meter amateur radio bands. These two bands were chosen because of their universal availability to amateur radio licensees in all countries. Each band requires different radio equipment for transmission and reception and requires the use of different radio direction-finding skills.

Radio direction-finding equipment for eighty meters, an HF band, is relatively easy to design and inexpensive to build. Bearings taken on eighty meters can be very accurate. Competitors on an eighty-meter course must use bearings to determine the locations of the transmitters and choose the fastest route through the terrain to visit them. Two meters, a VHF band, requires equipment that is relatively more complicated to design and more expensive to build.

Radio signals on two meters are more affected by features of the terrain. Competitors on a two-meter course must learn to differentiate between accurate, direct bearings to the source of the radio signal and false bearings resulting from reflections of the signal off hillsides, ravines, buildings, or fences. Large national or international events will have one day of competition using a two-meter frequency and one day of competition using an eighty-meter frequency.

In addition to the rules of the sport, ARDF competitions must also comply with radio regulations. Because the transmitters operate on frequencies assigned to the Amateur Radio Service, a radio amateur with a license that is valid for the country in which the competition is taking place must be present and responsible for their operation.

Individual competitors, however, are generally not required to have amateur radio licenses, as the use of simple handheld radio receivers does not typically require a license. Regulatory prohibitions on the use of amateur radio frequencies for commercial use generally preclude the awarding of monetary prizes to competitors. Typical awards for ARDF events are medals, trophies, plaques, or certificates.

The International Amateur Radio Union rules for ARDF competitions include provisions for youth competitions. These competitions are restricted to competitors aged fifteen years or younger. The course lengths are shorter, the transmitters may be located closer to the start, and a course setter may require that fewer transmitters be located.

The IARU rules go into great detail about certain procedures that are unique to international championships events. Not every ARDF competition follows all of these rules. Common variations to the generally accepted rules exist at local events. Most smaller events do not have large juries or on-course referees.

Some events will use simpler start procedures, such as using only one starting corridor instead of two. ARDF events on the two-meter band in North America, including the USA Championship, still commonly use frequency modulation instead of amplitude modulation for the transmission of the Morse code identifications.

A portion of an orienteering map marked for an ARDF competition. Here, labeled circles indicate the locations of two of the five transmitters, but these do not appear on the maps given to competitors. Ideally, the topographic maps used in ARDF competitions are created to the standards set by the International Orienteering Federation and used for orienteering competitions.

In fact, many ARDF competitions use existing orienteering maps, in collaboration with the orienteering clubs that created those maps.

A transmitter, orienteering control flag, paper punch and electronic punch device at an ARDF control.ARDF transmitters have a low power output and operate in either the two-meter or eighty-meter amateur radio band. The transmissions are in Morse code. Each transmitter sends a unique identification that can be easily interpreted even by those unfamiliar with the Morse code by counting the number of dits that follow a series of dashes.

The transmitters on course all transmit on the same frequency and each transmits in sequence for one minute at a time in a repeating cycle. Within a few meters of each transmitter, an orienteering control flag and punch device will be present. The punch device is either a paper punch with which competitors will mark a special card they carry with them or an electronic recording device that competitors will use to record their visit on a small magnetic storage device they carry with them.

Competitors need to locate the control flag at the transmitter site and use the punch device to record their visit. Good course design will attempt to preclude, as much as possible, runners interfering with the transmitter equipment as they approach the control. At large international or national events, jurors might be present at transmitter controls to ensure fair play.

The IARU rules include detailed technical specifications for transmitter equipment.[18] Transmitters for two meters are typically 0.25 to 1.5 watts power output and use keyed amplitude modulation. The transmitter antennas used on two meters must be horizontally polarized and omnidirectional. Transmitters for eighty meters are typically one to three watts power output keyed CW modulation.

The transmitter antennas used on eighty meters must be vertically polarized and omnidirectional. It is common for the transmitter, a battery, and any controlling hardware to be placed inside a weatherproof container such as an old ammunition case or large plastic food storage container for protection from the elements and wildlife.

The radio equipment carried on course must be capable of receiving the signal being transmitted by the five transmitters and useful for radio direction finding. This includes a radio receiver that can tune in the specific frequency of transmission being used for the event, an attenuator or variable gain control and a directional antenna. Directional antennas are more sensitive to radio signals arriving from some directions than others.

Most equipment designs integrate all three components into one handheld device. On the two-meter band, the most common directional antennas used by competitors are two or three-element Yagi antennas made from flexible steel tape.

This kind of antenna has a cardioid receiving pattern, which means that it has one peak direction where the received signal will be the strongest, and a null direction, 180° from the peak, in which the received signal will be the weakest. Flexible steel tape enables the antenna elements to flex and not break when encountering vegetation in the forest.

A small vertical antenna element can be combined with the loop or ferrite rod antenna to change the receiving pattern to a cardioid shape, but the resulting null in the cardioid is not as sensitive as the nulls in the bidirectional receiving pattern.

A switch is often used to allow the competitor to select the bidirectional or cardioid patterns at any moment. ARDF receiver equipment is designed to be lightweight and easy to operate while the competitor is in motion as well as rugged enough to withstand use in areas of thick vegetation.