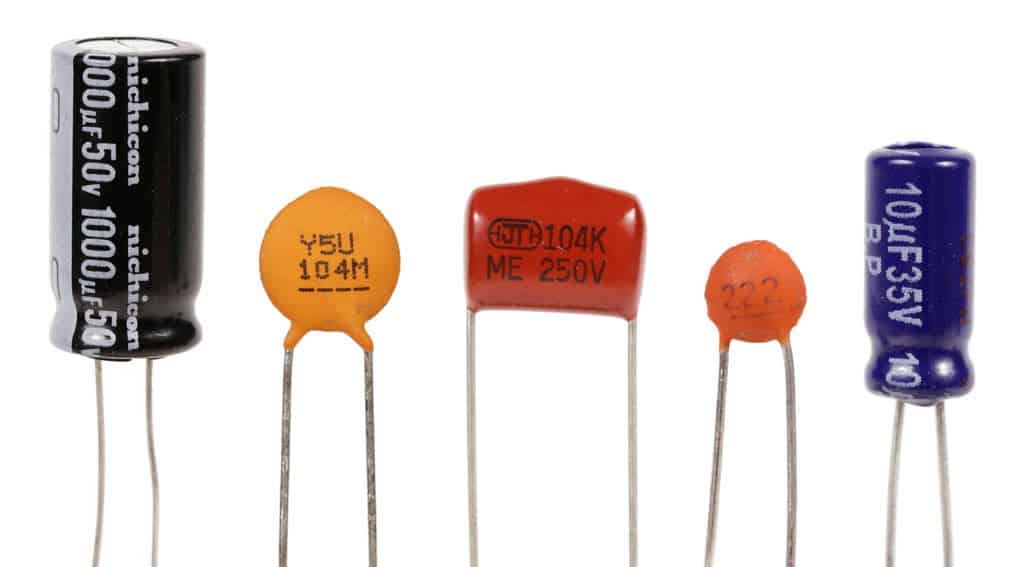 A capacitor, also known as a condenser, is a device that stores energy in an electrical field. Capacitors are open circuits to DC current, but their impedance drops as AC current passing through them has its frequency increased. Extremely high-frequency currents see capacitors as short circuits.

In some ways, capacitors behave as the opposite of inductors. This property is critically important to the circuit design of oscillators.

Capacitance (C) is a measure of the amount of electric charge (Q) stored on each plate of a capacitor for a given voltage (V) across the plates:

A capacitor has a capacitance of one farad (F) if one coulomb (C) of charge is stored when one volt (V) is applied across the plates. The farad is a very large unit, so values of capacitors are usually expressed in microfarads (µF), nanofarads (nF), or picofarads (pF).

The impedance of a capacitor is given by the formula 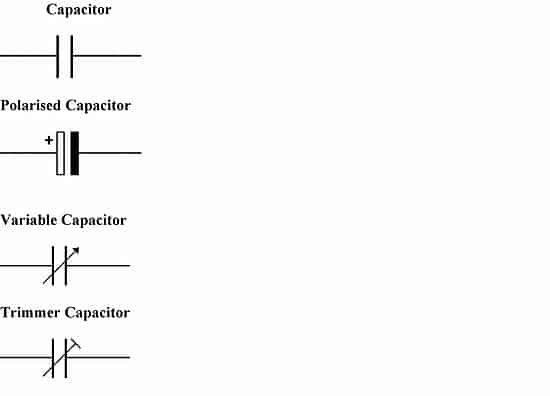 Capacitors in series and parallel

Capacitors in a parallel configuration each have the same potential difference (voltage). Their total capacitance (CT) is given by:

The reason for putting capacitors in parallel is to increase the total amount of charge stored by increasing the capacitance.

The current through capacitors in series stays the same, but the voltage across each capacitor can be different. The sum of the potential differences (voltage) is equal to the total voltage. Their total capacitance is given by:

When in series, the distance between the plates has effectively been increased, reducing the overall capacitance. In practice, capacitors will be placed in series as a means of economically obtaining very high voltage capacitors, for example for smoothing ripples in a high voltage power supply.

Most capacitors have numbers printed on their bodies to indicate their electrical characteristics.

Some are indicated with XYZ K/M VOLTS V where XYZ stands for the capacitance, the letters K or M indicate the tolerance of ±10% or ±20% respectively and VOLTS V represents the working voltage.

A capacitor that has written on its body:

In the early days of electronics, components were often made to fit a specific need, the values of early capacitors were of arbitrary (usually integer) base numbers. The more common values included 1.0, 1.5, 2.0, 3.0, 5.0, 6.0, and 8.0 as base numbers, but they were not necessarily limited to these values. Values were generally in microfarads (µF) and could be multiplied by any power of ten; picofarads were often called micro-microfarads (µµF) then.

In the late 1960s, a standardized set of geometrically increasing base values was introduced. According to the number of values per decade, these were called the E3, E6 or E12 series:
The same series are used for resistors, where E24/E48/E96 series are additionally used for even lower-tolerance components. These number series are known as preferred values.

Since most electrolytic capacitors have a tolerance range of ±20%, meaning that the manufacturer is stating that the actual value of the capacitor lies within ±20% of its nominal value, they are normally available in E6 (or even just E3) series values only (e.g. 2200 µF, 3300 µF, 4700 µF)  – the tolerance ranges overlap the intermediate values from the next higher series anyway.

Capacitors were once specified by their values in either microfarads or picofarads, which meant that both very small (such as 0.01 µF) and very large (such as 10,000 pF) numbers were in common use. Nowadays, it is considered preferable to use the nanofarad as well, and specify all values in the numeric range 1 – 999 only;

this makes the examples given above equal to 10 nF (yes, they are both the same!). Above 999 µF, the practice is not yet in common use; capacitors are not usually specified in millifarads (mF), probably because it would be too easily confused with microfarads (for which mF was once an acceptable abbreviation).

A table giving translations of previous commonly used multiples is as follows: 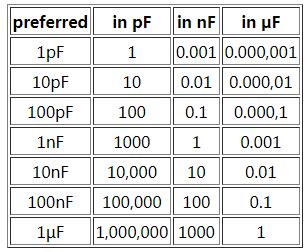