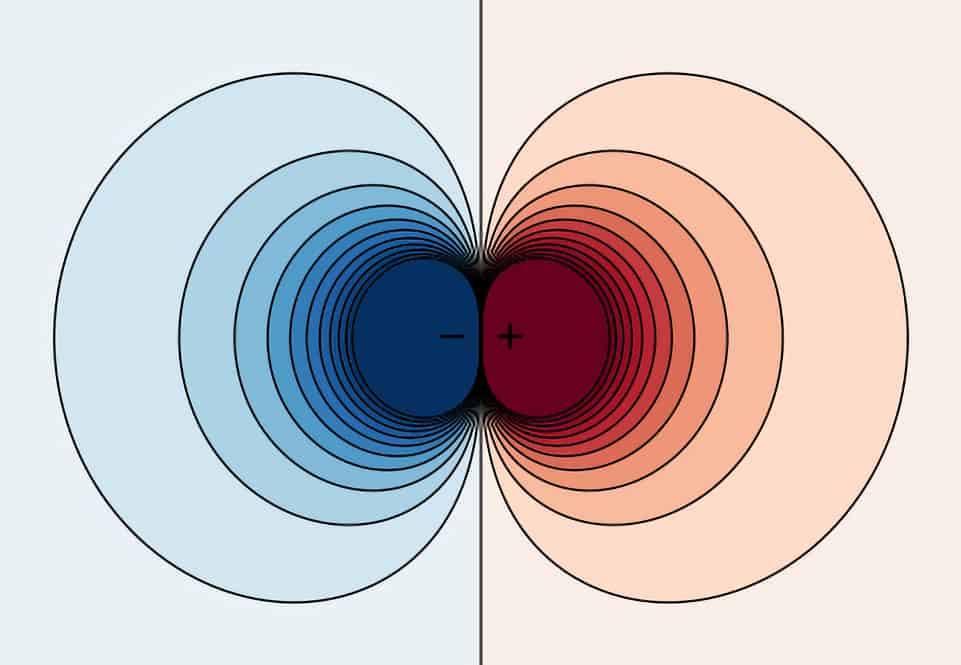 Dipoles are one of the first antennas ever created. Indeed, Hertz himself is often credited as the inventor of the dipole, 1886). It’s also the simplest antenna designs out there while staying very powerful and useful, in all bands.

Dipole antennas are “two-sided’ in that they are fed from a point between the two ends. In its simplest form, a dipole will be center-fed, with the total length being a half-wavelength at the frequency of transmission.

Half-wave center-fed dipoles with each leg 1/4 wavelength long are perhaps the most common antennas used in amateur radio. They are an example of a balanced antenna which does not require a counterpoise or other RF ground.

However, in the above diagram, the coaxial cable is not a balanced feeder because the outer shield is grounded and therefore the feedline itself can radiate. This can be solved by using a balun.

These 1/2 wave dipoles can be used on their odd harmonics as well as their fundamental resonant frequencies. For example, the amateur 40-meter band begins at 7 MHz. The 3rd harmonic is 3 x 7 = 21 MHz, where the 15-meter band begins. Thus a center-fed dipole that is a half-wavelength long at 40 meters (approximately 20 meters long, or 66 feet) can also be used as a 15-meter antenna.

Dipole length for resonance is calculated using either:

As the name suggests, the OCF dipole is not fed from the center. The advantage of a 1/2 wave OCF dipole fed 1/3 of the way from one end is that it can be used on the fundamental frequency and its even harmonics.

L is calculated from the formulae above. The dimensions D1, D2 and D3 are found using: 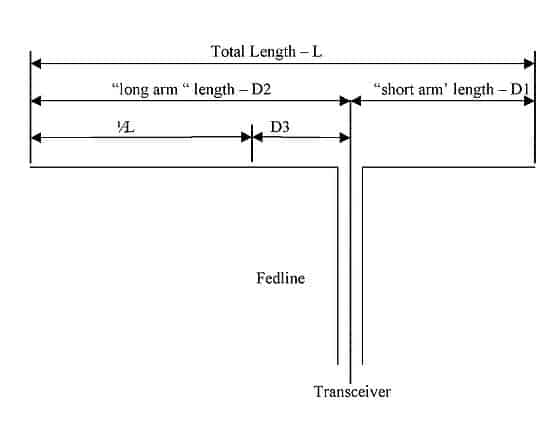 Although the G5RV is not a 1/2 wave dipole like those described above, this antenna (invented by Louis Varney, callsign G5RV) shares some physical characteristics with a center-fed dipole. The main difference between a dipole and G5RV is that the transmission line of a G5RV is part of the matching section that allows operation over a number of bands. Although the G5RV can be used on 20 meters without an antenna tuner, a tuner is necessary to use it on other bands. 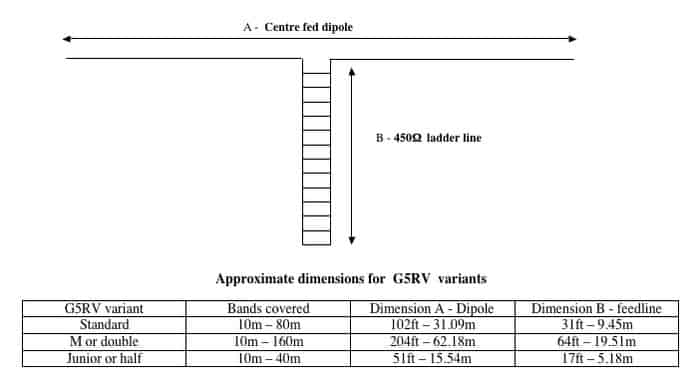 There are several different variations on the G5RV. The most well-known is fed through 450-ohm ladder line 10.6 meters (34.8 feet) long, with one end of the ladder line connected at the center-feed point of the antenna and the other connected through a balun to 50-ohm Coaxial Cable feedline. An alternative is to run balanced feedline (such as twin-lead or ladder line) all the way from the antenna feed point to the antenna tuner. The latter arrangement can be very effective, but not all lengths of feedline will tune properly. (See detailed discussion on feedlines.) Standard G5RV antennas are 31 meters (102 feet) long (excluding feedline and matching section length), and can be used on 80, 40, 20, 15, and 10 meters. A half-length G5RV 51 feet long can be used on 40, 20, 15, and 10; this variation is known as the G5RV jr.

The antenna can be installed as a horizontal dipole or an inverted V. If configured as such, the included angle at the apex should exceed 120 degrees. This means, for example, that a junior G5RV will be elevated at most 13 feet higher than the ends of the dipole. To calculate this, you can use the following, where we split the triangle created by the inverted V in two square triangles to apply simple trigonometry:

Folded dipoles are also 1/2 wavelength long. (The Greek letter <math>\lambda</math> is commonly used to represent wavelength.) However, the radiating elements are made of two parallel wires that are connected at the ends, and the feed point is at the center of one of the two wires. The advantage of the folded dipole is that its impedance is about 300 ohms, allowing it to be fed with a 300-ohm balanced line. It is possible to make both the radiating elements and the feedline from 300-ohm twin-lead, although some type of antenna tuner or matching section will be required to transform the impedance to 50 ohms at the transceiver.

These antennas are commonly used on FM repeaters on VHF bands, although care should be taken using 300-ohm twin-lead at VHF and higher frequencies. 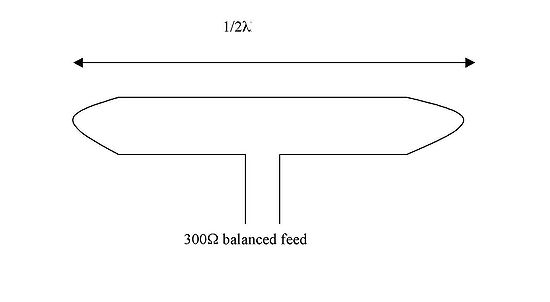 Several dipoles with different lengths, each of which is resonant on a different band, can be connected together at a common feed point and fed with a single feedline. This is known as a fan dipole. The radiating elements of the dipoles should not run parallel to each other.

Each of the dipole element pairs A, B and C in this diagram would usually be cut for a frequency in the center of the required amateur band. The total length of each dipole pair is 1/2<math>\lambda</math>.

The coaxial dipole antenna consists of a half-wavelength section of coax line with the shield opened a center and feed line attached to the open ends of the shield. The outside conductor of the coax acts as a half-wave dipole in combination with the open wire end sections of the antenna. The inside sections, do not radiate but act as quarter-wave shorted stubs which presents a high resistive impedance to the feed point at resonance and tends to cancel reactance as frequency off resonant frequencies, thus increasing bandwidth.

The antenna can be cut for any operating frequency, from 160-meters down. The RG-58U is capable of handling a full kilowatt. This design is broad-banded will provided low SWR over the entire 80 and 40-meter bands. Construction techniques are not critical. It can be put together with insulators and relief strains or thrown together in an emergency with just twisting and taping. How well it’s built will determine how long it stays up of course.

The coaxial dipole antenna is perfect for stealth work. As it is insulated it can be placed in trees, under eaves or next to house trim even in attics. It can be put up as a dipole, inverted V, vertical dipole and sloper. Its ends can be bent to accommodate unusual spaces. The 40-meter antenna can be used for 15 meters. 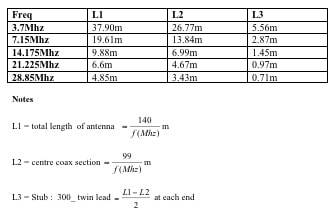 The Coaxial Trap Dipole is an asymmetrical wire antenna with traps at various points along the dipole arms to make them resonant at the required frequencies.

The diagram below shows approximate positions for coaxial traps. These should be verified by cutting them longer and trimming to achieve resonance.

Coaxial traps are coils of coaxial cable wound around cylindrical formers as shown in the diagram below. Please note the connection details inside the former.

Formers can be strengthened in a number of ways to avoid stress on the solder joints: