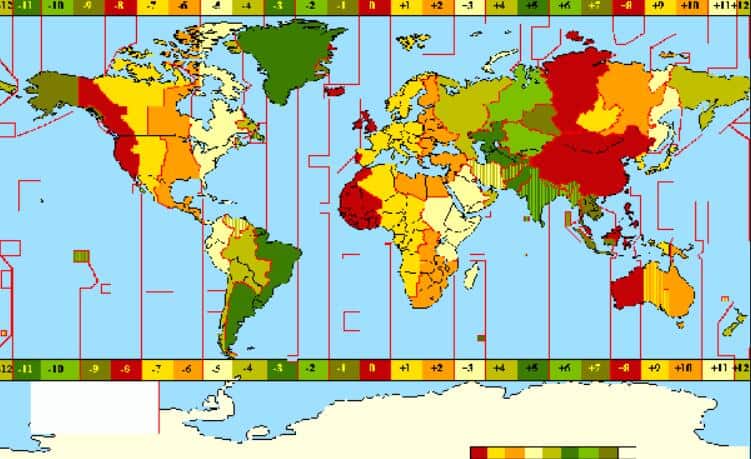 Where does it come from?

At longitude 0° 0′ 00″, the line on our maps that passes from pole to pole, divides the Earth into east and west, This line – known as the Greenwich Mean Meridian – passes through Greenwich and hence time calculated from it is known as Greenwich Mean Time.

Historically, until the 19th Century, many countries and even individual towns kept their own local time based on the sun’s passage across the sky. This reflected, for most people, the limitations on their movements from one place to another. In Europe, there were 20 prime meridians. For example, the Russians had two or three, the Spanish had one.

With the rapid expansion of the railways and communications networks during the 1850s and 1860s, setting a standard global time soon became essential. 125 years ago (at time of writing October 2009), 41 delegates from 25 nations met in Washington at the 1884 International Meridian Conference to decide from where time and space should be measured.

Greenwich was selected to have longitude 0º by a vote of 22 to one, with only San Domingo against and France and Brazil abstaining.

The meeting also agreed Greenwich Mean Time (GMT) would be used as the standard for the world, with the day beginning at midnight at Greenwich and counted on a 24-hour clock. The key reason why Greenwich was chosen over Washington, Berlin and Paris, was that over 70%% of the world’s shipping already depended on sea charts that used Greenwich as the Prime Meridian.

Many countries have opted out of the universal time system, possibly to demonstrate national independence. In most cases however it was to keep in time with neighbors or maintain standard days within their borders.

What is leap time?

Since the 1960s, atomic clocks rather than astronomy have been keeping the world’s time and have forced GMT to adapt.

The combination of atomic clocks’ super-accurate measurement and the fact that the rotation of the Earth is irregular and slowing mean atomic time and Earth time – and therefore GMT – slowly drift apart.

To keep them in sync “leap seconds” are added and produce a compromised version of GMT called Coordinated Universal Time, which keeps atomic time tied to the Earth’s rotation.

The 125th anniversary of the creation of the Greenwich Prime Meridian was Tuesday 20 October 2009.