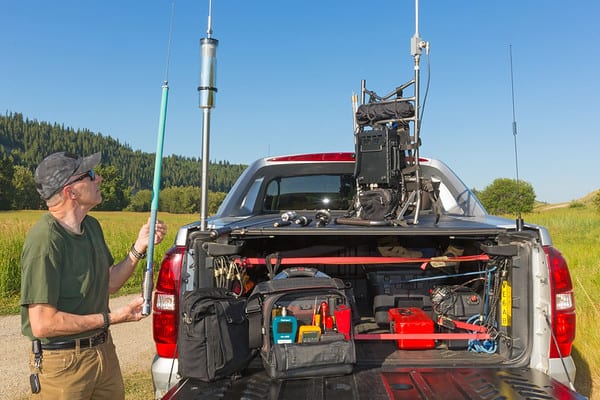 Mobile antennas should not be confused with portable antennas, which are designed to be easy to transport and set up but are not used while in motion.

Mobile antennas for automobiles are usually verticals of limited height. They must allow the vehicle to be driven under an overpass or tree branch without damaging the antenna or vehicle. A common maximum height for this type of antenna is 13 feet 6 inches (410 cm). On VHF and higher frequencies, this is not difficult, but HF requires that mobile antennas be loaded.

Antennas for handheld transceivers tend to be limited due to space constraints, with vertical antennas of 1/4 wavelength (at VHF) or smaller commonly used.

Antennas for handheld transceivers typically do not provide a proper ground plane; the unit itself and any attached cables (such as external speaker/microphone or power) serve as a rudimentary ground plane for a vertical antenna.

The smallest handheld antennas will require built-in antenna loading coils to obtain resonance even at VHF wavelength, with a corresponding loss inefficiency. The lower power and smaller antenna will provide greatly reduced coverage for handheld units, compared to almost all other classes of mobile or fixed stations.

Most antennas in land-mobile operation are verticals, both due to their smaller size (as compared to dipoles and their derivatives) and their omnidirectional characteristics.

As a vertical antenna is effectively one-half of a dipole, it may be as small as one-quarter wavelength but normally must be operated against a ground plane. For antennas mounted on vehicles and small watercraft, the metal body of the vehicle itself is most often connected to the station ground and used as a ground plane.

Where insufficient space exists to accommodate a quarter-wavelength or larger antenna (typically an issue for HF or mediumwave antennas in mobile operation), antenna loading coils are used to lower the resonant frequency of the antenna.

Selection of suitable loading coils for each individual HF band is typically done manually, using either a single variable inductor (as in the screwdriver antenna), a single inductor with multiple manually-selectable taps to allow part of the coil to be bypassed at higher frequencies, or by using a series of interchangeable elements with different loading coils for each band.