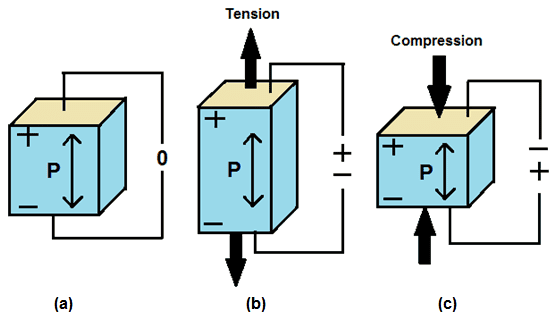 The piezoelectric effect is the ability of some materials to produce an electric current when they are exposed to physical stress. It also works in the opposite way, with the material deforming slightly when a small electric current is applied. Piezoelectricity was discovered more than one hundred years ago and has applications in electronic clocks, gas ovens, inkjet printers, and many other appliances.

The piezoelectric effect was first discovered in 1880 by brothers Pierre Curie and Jacques Curie. The Curie brothers only found that piezoelectric materials can produce electricity. The next development was the discovery by Gabriel Lippmann that electricity can deform piezoelectric materials. It was not until the early twentieth century that practical devices began to appear. Today, it is known that many materials such as quartz, topaz, cane sugar, Rochelle salt, and bone have this effect.

How the Piezoelectric Effect Works

The piezoelectric effect occurs when the charge balance within the crystal lattice of a material is disturbed. In the diagram below, the left-hand side illustrates a hexagonal crystalline structure. Such structures can be thought of as being made up of three matched pairs of ions distributed around a regular hexagonal lattice. When there is no applied stress on the material, the positive and negative charges are evenly distributed so there is no potential difference.

The right-hand side of the diagram illustrates the situation when the crystalline structure is stressed physically. The lattice is distorted slightly and is no longer a regular hexagon. Pairs of positive ions on the left and pairs of negative ions on the right are forced to be closer together. The “squashed” hexagon essentially becomes a dipole with a potential difference between the two sides. This can be as high as several thousand volts, accompanied by an extremely low current. 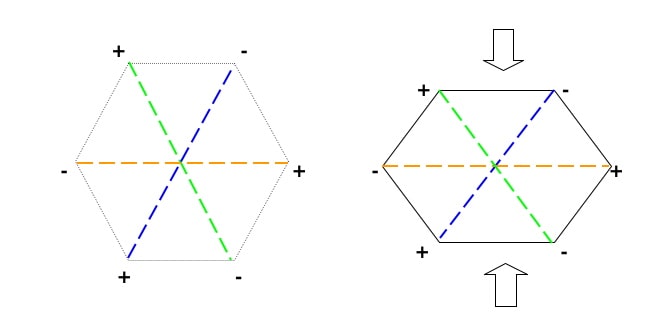 Quartz has a natural frequency that is ideal for creating the oscillations needed to maintain exact frequency or time. Hence Quartz is very useful in the construction of high stability oscillators