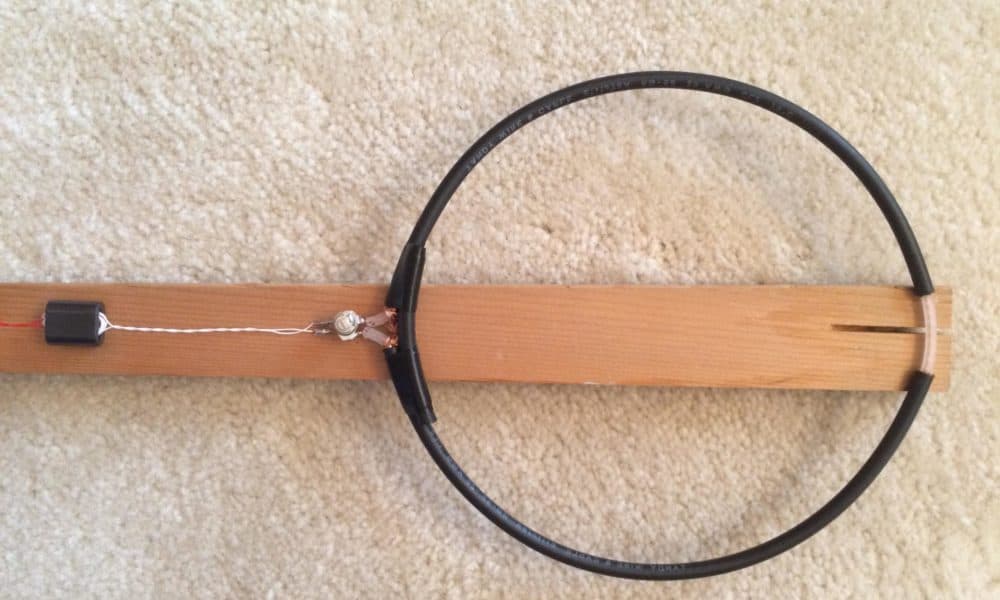 A small transmitting loop, small tuned loop or magnetic antenna is defined as a loop antenna of less than one-tenth to one-quarter of a wavelength in circumference. These are normally constructed as a single turn of heavy-gauge wire (AWG #10 or larger), copper pipe or tubing and are tuned to one specific frequency at a time using a series variable capacitor.

As these antennas can be constructed in relatively little space, often with a diameter of several feet or less, they are used in HF applications where no suitable location is available for a full-sized antenna such as the beam antenna. In some cases, these have been constructed in attics or used for portable operation.

While a circular loop is efficient in that it provides the largest area for anyone given the length of the conductor, other form factors (such as a square formed from copper pipe and 90° elbows) have also been successfully employed.

A wire loop inherently acts as an inductor with a radiation resistance of a fraction of an ohm. In order to keep other resistance and impedances from becoming predominant, the resistance must be kept to a minimum in transmitting antennas by the use of heavy wire or tubing and the inductance of the loop must be compensated using a large series capacitor.

This yields an antenna that operates as a resonant LC circuit at one specific frequency with an impedance very close to zero; at other frequencies, the impedance rises sharply and the antenna is unresponsive. 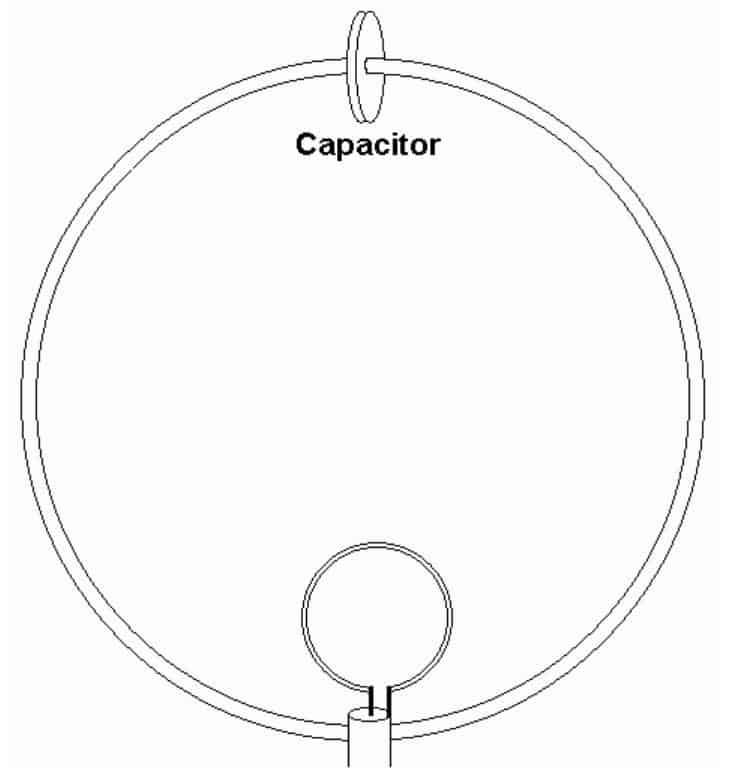 Due to the need to maintain low impedance, capacitors used must have effective series resistance of near-zero, despite their handling of large amounts of current and RF voltages which (in any larger than a QRP operation) often reach 4kV or more.

As the circuit is largely built from reactive elements, voltages and currents at individual points far exceed those which normally would be associated with the real power being transmitted. The capacitors must also be variable over a wide range to allow the loop to be manually tuned to one of various frequencies and bands in the HF spectrum.

Vacuum variable capacitors are very well suited to this task but maybe costly even from industrial surplus sources. A possible alternative is an air-variable capacitor in which all connections to individual plates are welded and there are no moving connections to the rotor. The butterfly capacitor (MFJ-19, MFJ-23) is a split-stator capacitor based on this approach; an air-variable design, effectively has two stators (one connected to each end of the loop) and a rotor that moves between them to adjust capacitance. No direct electrical connection is wired to the rotor; there are no brushes or slip rings.

Some radio amateurs have constructed their own capacitors for use in tuned loop antennas; these are usually air-variable capacitors built from individually machined plates or trombone capacitors in which two concentric pieces of the copper pipe are separated by an insulator and one slides into the other to vary the capacitance.

As the circuit is very frequency-selective, often a means is desired to remotely adjust capacitance to tune the antenna to the desired channel frequency.

Reduction drives may be used to convert a single-turn variable capacitor to more finely-tunable multiturn control and motors (such as steppers designed for computer printers or servos used in radio-control operation) may provide a means to tune the antenna remotely.

As the impedance of the small loop antenna at resonance is near-zero, it must be matched to the higher impedance (typically 50Ω) of the transmitting equipment.

Possible methods to match the transmitter to the loop are:

1 thought on “Small Tuned Loop: Everything You Need to Know”

Amateur Radio Wiki is a participant in the Amazon Services LLC Associates Program. As an Amazon Associate, I earn from qualifying purchases by linking to Amazon.com and affiliated sites.
9 Shares
Pin9
Tweet
Share