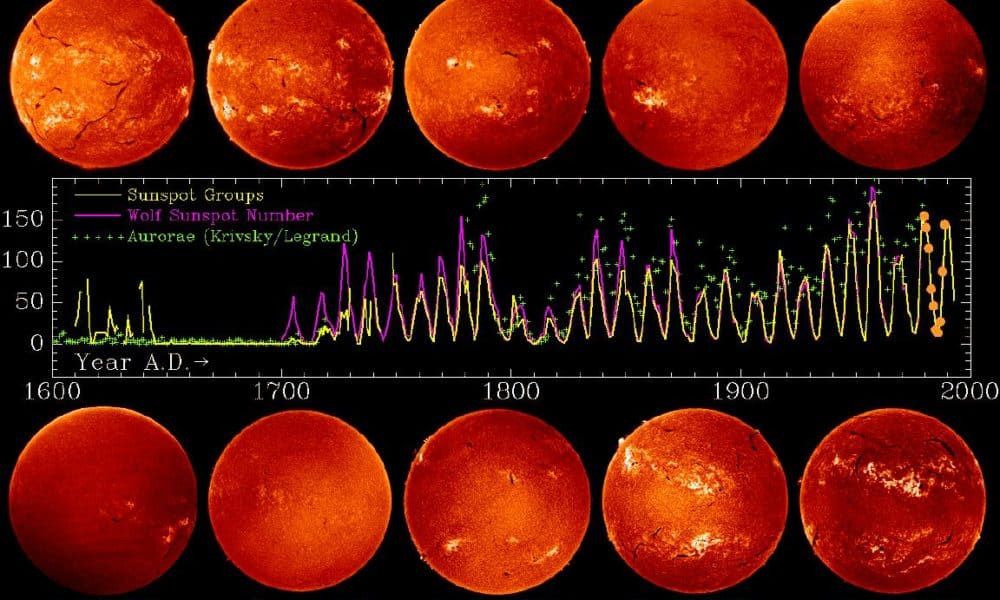 The sunspot cycle is generally known to be a cycle of approximately 11 years between successive peaks in sunspot activity.

On January 4th, 2008, the first recent “reverse polarity” sunspot was recorded. This officially marked the start of sunspot cycle 24.

Why are the sunspot cycles numbered?

The first written evidence of sunspot observations is from around 800BC in China. The first telescopic observations of the sun started in the 1600’s, with the cyclic nature of sunspot activity being described by Samuel Schwabe in 1843. We are now (2009) at the start of a new sunspot cycle.

How do sunspots affect propagation?

Most shortwave radio users know that there is a correlation between sunspots and propagation conditions. Sunspots are dark regions on the surface of the Sun, which are cooler than surrounding areas. They occur when the lines of the Sun’s magnetic field become twisted. There are more sunspots when the Sun is more active and produces more radiation which can affect the Earth’s ionosphere.

The Flayer of the ionosphere is caused mostly by ultraviolet radiation from the Sun. During times of high solar activity, there is more radiation from the Sun, and the resulting higher ionization levels in the F layer allow higher frequencies to be reflected. For example, around solar maximum, the 10-meter band (28 to 30 MHz) is frequently open for extended periods of time, and long distances can be worked with rather low power levels.

The D layer is also ionized more during the solar maximum, resulting in more attenuation, especially at the lower frequencies.

What is solar flux?

How is sunspot activity predicted?

NASA uses a combination of prediction techniques and has produced the following graphic that shows the range within which the next sunspot cycle will be. 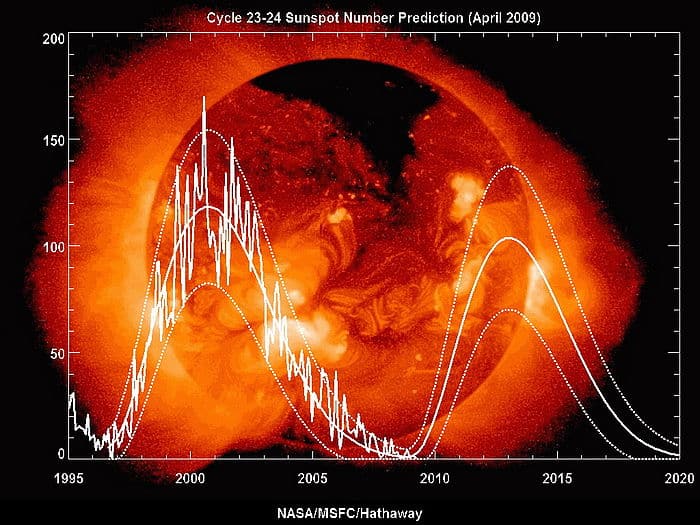 Why is there variation in the sunspot cycle?

June 17, 2009: The sun is in the pits of a century-class solar minimum, and sunspots have been puzzlingly scarce for more than two years. Now, for the first time, solar physicists might understand why.

At an American Astronomical Society press conference today in Boulder, Colorado, researchers announced that a jet stream deep inside the sun is migrating slower than usual through the star’s interior, giving rise to the current lack of sunspots.

Rachel Howe and Frank Hill of the National Solar Observatory (NSO) in Tucson, Arizona, used a technique called helioseismology to detect and track the jet stream down to depths of 7,000 km below the surface of the sun. The sun generates new jet streams near its poles every 11 years, they explained to a room full of reporters and fellow scientists. The streams migrate slowly from the poles to the equator and when a jet stream reaches the critical latitude of 22 degrees, new-cycle sunspots begin to appear.

Howe and Hill found that the stream associated with the next solar cycle has moved sluggishly, taking three years to cover a 10-degree range in latitude compared to only two years for the previous solar cycle.

The jet stream is now, finally, reaching the critical latitude, heralding a return of solar activity in the months and years ahead.

This link gives an explanation as to why the sun has been “quiet” for longer than expected.