Simplified ionospheric models portray the ionosphere as a series of horizontal layers that vary with time, location and sunspot activity. The real ionosphere is much more complex than this, particularly in equatorial and polar regions.

What is Trans-Equatorial Propagation (TEP)?

Historically, the effect was first noticed in the 1940’s by both military and amateur operators who discovered that it is possible to communicate in the VHF band over intercontinental distances during times of high sunspot activity.

The first organized and therefore relatively large scale TEP communications occurred during 1957-1958 in the peak of sunspot cycle 19. Sunspot peaks in 1970 (cycle 20) and 1977 (cycle 21) expanded our knowledge of the phenomenon.

When does TEP occur?

Two distinct types of TEP have been identified:

Why does TEP occur over the Equator?

There are three general “zones” in the atmosphere of the Earth, Polar, Temperate and Equatorial. In terms of density, it has been found that equatorial ionospheric areas are denser than those over polar regions.

This affects useable frequencies within those regions. Perhaps because they are at the “extremes” of the earth in terms of their exposure to the effects of the sun, the polar and equatorial regions are subject to various unusual and unexpected variations in ionospheric conditions – these often occurring in the F-Layer.

Perhaps the most interesting of these effects is known as the “equatorial anomaly”. This occurs where a high electron concentration is found on each side of the magnetic equator and is usually seen in the region of 10 to 20 degrees latitude.

Afternoon TEP is believed to occur when a signal is reflected first by an anomaly on one side of the equator and then again by another anomaly on the other side. 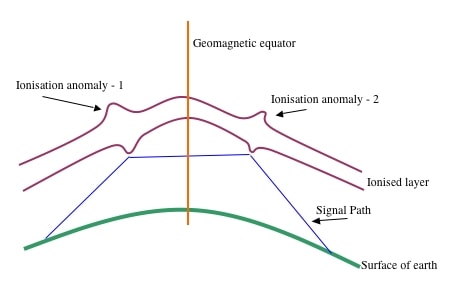 Evening TEP is less well understood, but is believed to rely on “ionospheric bubbles” – areas of high ionization density off which signals are reflected.

What are the characteristics of afternoon TEP?

What are the characteristics of evening TEP?

Is it possible to predict TEP conditions?

At the moment it is not possible to predict TEP conditions, but the following are indicative that those conditions may be possible.

3 thoughts on “Transequatorial Propagation, TEP: Everything You Need to Know”