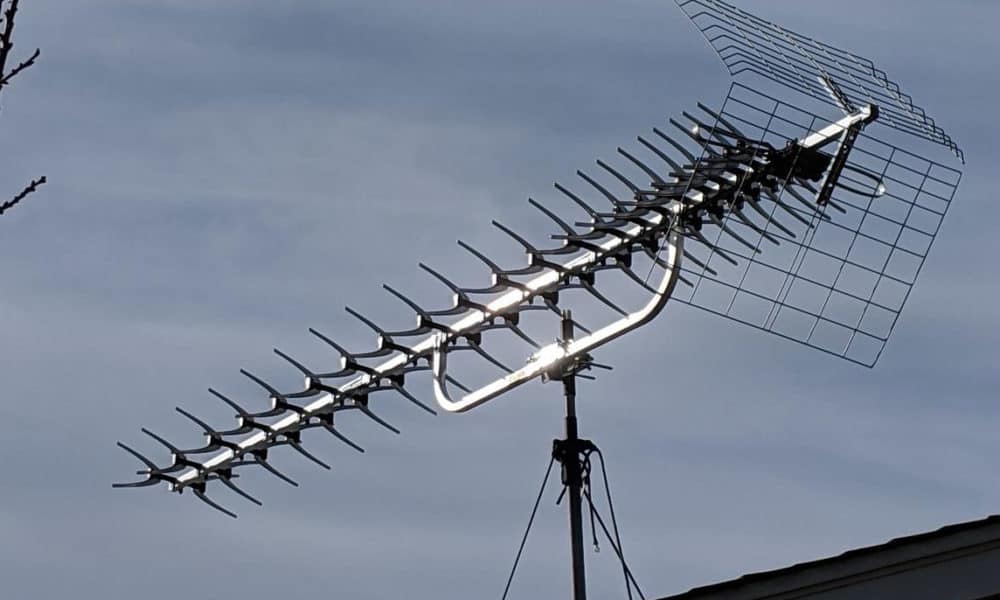 A Yagi-Uda antenna (named for its two Japanese creators) is built around a half-wave dipole mounted on a perpendicular boom.

Behind the dipole, which serves as the one driven element in this antenna, is a parasitic reflector – typically a conductive metal rod slightly longer than the one-half wavelength. Ahead of the dipole are a series of parasitic director elements – conductive metal rods slightly less than the one-half wavelength and diminishing in size as distance increases from the driven element.

A Yagi is typically a highly-directional single-band antenna with a good front-to-back ratio, suitable for use with an antenna rotor to point at the desired station and away from interference and reflections arriving from other directions.

On UHF frequencies, a Yagi is typically close to a foot in width and several feet in length, with ten to twenty individual director elements extending toward the direction of the desired signal. A VHF yagi will typically have fewer elements, but the size of each element and the size of the inter-element spacing will increase to match the longer wavelength.

Antennas for HF use tend not to use more than one director, one reflector and one driven element as size and weight become a constraint. Antenna rotors mass-marketed for VHF/UHF broadcast TV use tend to be too small to handle the added weight and size of even a simple HF beam design, so heavier motors such as the Ham IV series have been devised for these applications.

Most full-size antennas for outdoor TV/FM broadcast reception installations are based on some combination of Yagi or log-periodic antenna‎ design principles. The two antenna styles, while aesthetically similar, differ electrically primarily in the use of multiple driven elements in the log-periodic design to yield coverage over a wider range of frequencies.