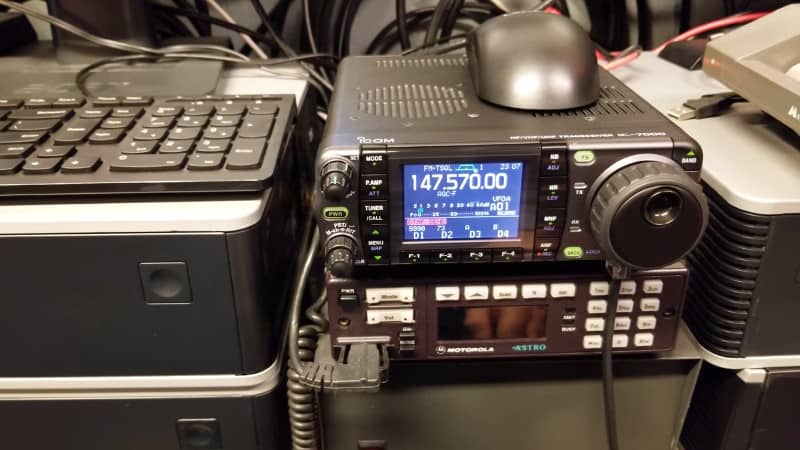 A QSL card is a written form of QSL, a confirmation of contact between two parties. Traditionally, amateurs traded QSL cards. These are usually about the same size as a postcard, often elaborately decorated to express individuality, and were mailed from person to person. QSL cards can also be used to confirm one way communication ie, to a listener from a radio station either commercial or amateur.

A number of amateurs use electronic QSL “cards”. These are available through eQSL. This website has a logging facility with which users can email other registered users and exchange QSL cards electronically. Some hams display these electronic QSL’s on web pages.

Modes such as SSTV lend themselves to another way of exchanging QSL’s. In the case of SSTV, each station will send a screen that contains contact detail.

The minimum information on a QSL card is:

While sending QSL cards directly to a distant station is most often fastest, the confirmation of large numbers of international contacts may prove expensive. An alternative offered by many national and regional amateur radio societies is a bureau system.

QSL’s from individual stations are sent to an outgoing bureau locally; that bureau bundles all outgoing cards for each country and sends each bundle as a single package – reducing international postage costs. At destination, a national or regional incoming bureau holds received cards so that they may be claimed by the operator of the intended station.

The International Amateur Radio Union maintains a list of QSL Bureaus for most nations worldwide. There is no incoming bureau in the following countries:

QSL bureaux are operated by volunteers and time to receive cards may be months longer via bureau compared to a more direct route. Cards submitted to the bureau system should be of reasonably-standard dimensions (typically postcard-size, 3 x 5″-5½” are suitable) and sorted by destination callsign prefix.

Incoming cards are forwarded to individual provincial bureaux. To receive cards from the provincial bureau, a radio amateur must provide self-addressed stamped envelopes, payment or both (depending on the bureau) to cover forwarding costs. The incoming bureau does not require that the recipient of the cards be a member of a club or association.

Note: When sorting cards destined to mainland US radio-amateur stations, the first numeric digit in the calls, not the first letter, identifies each of the ten main regions within the US. (For instance, W3, AA3, N3 and K3would all indicate the same region.)

Incoming cards are forwarded to one of the individual regional bureaux for radio amateurs in the continental US. Alaska, Hawaii and US territories and possessions are not handled by the eleven main regional bureaux, although some may have a local bureau. The recipient must provide SASE, payment or both to cover forwarding costs, depending on the policy of the individual bureau – ARRL membership is not required to receive cards.

There is no incoming bureau for the following US possessions:

You will need to familiarise yourself with the rules and guidelines of your bureau. Some terms that are used by Bureaux are :

SAE stands for Self Addressed Envelope

This is an envelope with your name and complete mailing address written on it. This is usually sent along with your QSL card to the person you wish to exchange QSL cards directly instead of going through the QSL Bureau.

To help defray the cost of sending the SAE back to you, a Green Stamp or an IRC (International Reply Coupon) is normally enclosed.

If the other person is within your own country, it will be more convenient to use a SASE.

SASE stands for Self Addressed Stamped Envelope. This is the same as an SAE except that it has a postage stamp of sufficient value for the envelope to be mailed back to the sender.

This method works only if the sender and sendee from within the same country. You cannot send a SASE with a U.S. stamp to a country outside the U.S.A. as U.S. stamps are not accepted by foreign postal agencies and vice versa.

Cash enclosed in the mail, usually one or two US $1 bills, as an alternative to using IRC (International Reply Coupon). Used only when sending directly to a DX station as enclosures cannot be made when sending cards through bureaux. If used, must be carefully concealed due to the risk of theft.

In some cases, a distant station will delegate the task of responding to QSL requests to another radio amateur, often in another region. The QSL manager is responsible for storing a copy of the station’s logs (often in an electronic form, such as ADIF Amateur Data Interchange Format), verifying requests and issuing QSL cards. Requests to “QSL via (callsign of another station)” are most commonly used by DXpedition operators and stations in remote locations where direct mail would incur an undue delay.

A QSL Managers’ Society maintains a list of radio amateurs willing to handle QSL requests on behalf of other stations. Various databases listing QSL managers by call sign of individual stations served include:

A common problem in acquiring QSL’s is the broken call; the station and contact were originally valid, but a callsign was incorrectly recorded or transcribed. This may lead to acknowledgment being sent to the wrong station or to individual QSO’s not being credited to operators engaged in contesting and otherwise eligible for awards.

In some cases, broken calls can be spotted by checking the station’s log against a callbook for the region contacted; a lookup of an incorrectly-recorded callsign may return “no such station” or identify another station situated far distant from the reported location.

Problems can also arise when QSL cards are missing a key piece of information (such as callsigns, location, band and mode) or contain handwritten text which is not clearly legible.

Less often, issues arise due to a distant operator’s willful use of an incorrect callsign or location on-air:

In some cases, a bogus radio amateur operation has issued QSL cards which look to be valid and these may be unknowingly collected by legitimate amateur stations. In order to maintain the integrity of contest and award programs, QSL’s from contacts with any station known for historically fraudulent or illegal operation are normally rejected by contest organizers.

There are currently two nations with no licensed radio amateur service; many other DXCC entities remain rare as they correspond to distant or uninhabited islands to which access is difficult or impractical.

As of 2008, the list of most needed DX station QSL’s included: