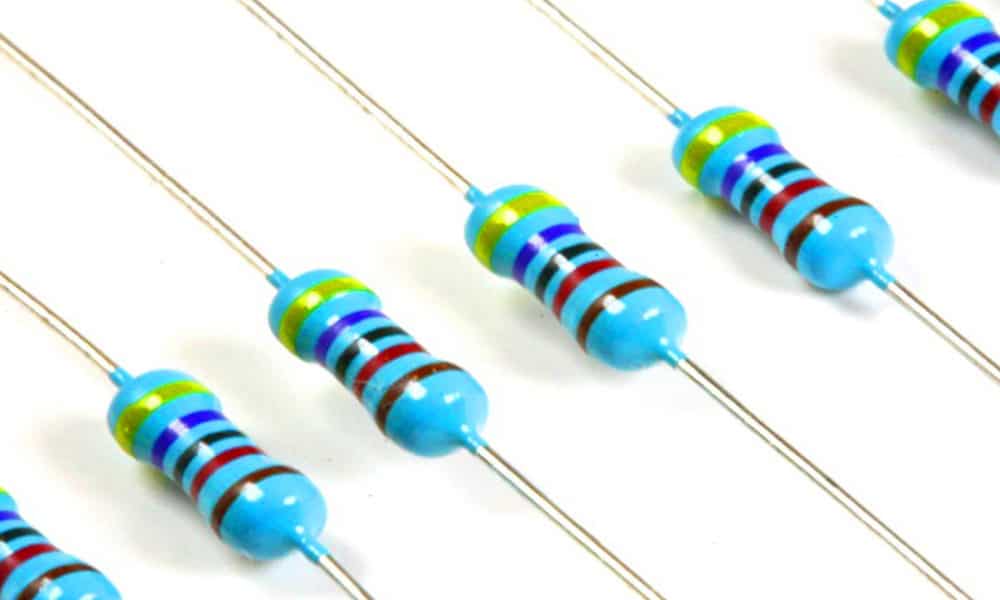 Resistance (R) is the measure of how much an object – a resistor – opposes the flow of electric current. The resistance of an object is measured in Ohms (<math>\Omega</math>)

Resistivity (<math>\Rho</math>) is a measure of how strongly a material opposes the flow of electric current. Resistivity is measured in ohm meters (<math>\Omega</math>m). Related wiki page: table of resistivities

The relationship between resistance and resistivity is:

A resistor is a passive electrical device that has been manufactured specifically to add resistance to a circuit, to effect a voltage drop.

The mathematical equation that describes the relationship between resistance, voltage drop and current through a resistor is known as Ohms Law 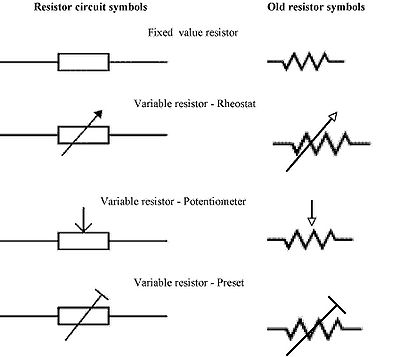 Resistors in series and parallel

The resistance of a resistor is coded into a series of coloured bands along its length:

Carbon composition resistors consist of a solid cylindrical resistive element made from a mixture of finely ground carbon and insulating material. The mixture is held together by a resin, and wires are either embedded in the ends, or a thin metal cap and wire is attached to each end. The resistance is determined by the ratio of the powdered ceramic and the carbon. Higher concentrations of carbon result in lower resistance. These resistors are generally of high tolerance.

A spiral is used to increase the length and decrease the width of the film, which increases the resistance. Varying spiral shapes are used to create a variety of resistances.

Thin film resistors are made by sputtering the resistive material onto the surface of the resistor. The thin film is then etched to attain the desired resistance. They are then trimmed to an accurate value by abrasive or laser trimming.

A common type of axial resistor today is referred to as a metal-film resistor. MELF (Metal Electrode Leadless Face) resistors often use the same technology but are a cylindrically shaped resistor designed for surface mounting. [Note that other types of resistors, eg carbon composition, are also available in “MELF” packages].

Wirewound resistors are commonly made by winding a metal wire around a ceramic, plastic, or fiberglass core. The ends of the wire are soldered or welded to two caps, attached to the ends of the core. The assembly is protected with a layer of paint, molded plastic, or an enamel coating baked at high temperature. The wire leads are usually between 0.6 and 0.8 mm in diameter and tinned for ease of soldering. For higher power wire-wound resistors, either a ceramic outer case or an aluminum outer case on top of an insulating layer is used. The aluminum cased types are designed to be attached to a heatsink to dissipate the heat; the rated power is dependant on being used with a suitable heatsink, e.g., a 50 W power rated resistor will overheat at around one-fifth of the power dissipation if not used with a heatsink.

Because wire-wound resistors are coils they have more inductance than other types of resistors, although this property can be minimized by winding the wire in sections with alternately reversed direction.

Foil resistors have had the best precision and stability ever since they were introduced in 1958.

Perhaps the most common use for resistors in a circuit is as a voltage divider:

Amateur Radio Wiki is a participant in the Amazon Services LLC Associates Program. As an Amazon Associate, I earn from qualifying purchases by linking to Amazon.com and affiliated sites.
7 Shares
Pin7
Tweet
Share